Kanha Tiger Reserve languorously spread across a wide spread area of 1,949 sq. km, with 940 sq. km of core area and 1,009 sq. km of buffer zone; is one of the best habitats for tigers in India. The oldest known tiger in the wild, Munna, who was a legend in his own right, romped these jungles and was recognised by a symbol on his forehead that reads – "CAT". After his demise, Munna passed his legacy to his royal son, ChotaMunna who was a dominant male in these forests until last year.

Kanha is located in the Central Indian Highlands, which are part of the extensive tableland that forms India’s main peninsula. These were once an unending stretch of forests that formed a significant part of the country’s wilderness and wildlife habitats. These forests are now fragmented into parks such as Panna, Bandhavgarh, Kanha, Pench and Sanjay. 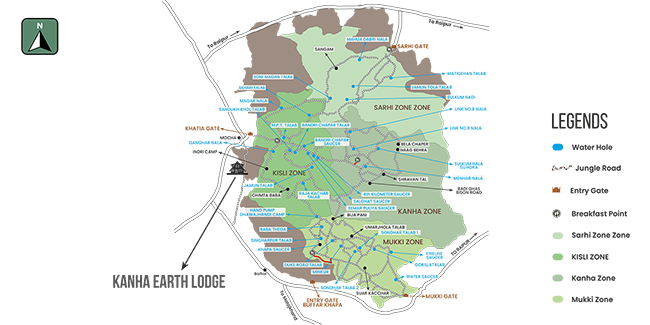 Kanha's undulating landscape is dotted with dense groves of vegetation, hillocks and meadows. Of all these habitats, it is Kanha’s meadows that are its lifeline, as they sustain large numbers of Chital, Sambar, Barasingha and Gaur, which in turn support populations of predators and co-predators like Tigers, Leopards, Wild Dogs, Jungle Cats and Foxes.

The park is primarily a moist Sal and moist mixed deciduous forest where Bamboo, Tendu, Sal, Jamun, Arjun and Lendia flourish. It is home to over 1,000 species of flowering plants and about 300 species of birds and one of the best park for tiger safari in India.

Kanha’s lush Sal and Bamboo forests provided inspiration to Rudyard Kipling for his famous narrative, “The Jungle Books”. Yet, Kanha’s greatest achievement, has been the preservation of Hard Ground Swamp Deer or Barasingha from near extinction. They numbered just sixty-six in 1970 and today there are more than four-hundred.

In Kanha the four major safari zones are declared as the core zones. Core zone is the central part of the tiger reserve and it shares its boundary with the buffer zone.Buffer Zone is the area that surrounds or adjoins the core areas where nature is conserved alongside compatible human uses of the land or water.

The four core zones which are accessible from different entry gates. All these core zones are very popular among tourists.

The Buffer Zones of Kanha are: Khatia, Sijhora, Phen and Khapa

Kanha enjoys a varying weather type which remains moderately warm in Summers & gets extreme cold in Winters. When on Safari, besides wearing appropriate clothing there are a few essentials that can make the overall experience remarkable. Here is a list of items that can be carried along;

Read our blog to know more about Gates & Zones in Kanha


“Very clean, comfortable lodge, where each bungalow is apart from the others so you can have total privacy. The food is always good and tasty. But what will remain in my mind, apart my first sight of a tiger during 8 minutes, is how all the staff is kind and attentive. Impossible to find a better service.”

Your request has been sent successfully. We will get back to you as soon as we can.

Something appears to have gone wrong, please try again.